Greetings from India. This is a brief Report of activities of “Religions for Peace India” for the period from April 2018 to March 2019.

India is a founder member of WCRP and ACRP. The source of our inspiration and interest in multi-religious approach to find solution to various problems springs from the age-old belief in, what we call, “Sarva Dharma Smabhava” (Equal respect for all religions).  “Unity in Diversity” is India’s national creed. “Ahimsa Paramo Dharma” (Nonviolence is the Ultimate Righteousness) is yet another ancient exhortation we all believe in. Respecting and upholding these civilizational values, our secular democratic Constitution guarantees equal respect and right to all religions.  So, believers of all the religions live together in India from ancient times to the present in relative harmony and flourish and progress without hitch or hindrance.

WCRP in India, now called “Religions for Peace India,” continued to engage itself in various activities to promote peace, interfaith harmony and cooperation, and understanding among people across religious communities and social divides.

Religions for Peace India successfully organized the 2018 Executive Committee meeting of ACRP on 16-19 April 2018. It was held in the beautiful Campus of St. John’s National Academy of Health Services, Koramangalam, Bengaluru, Karnataka. More than 30 Members representing more than a dozen countries in Asia-Pacific region attended the annual meeting. 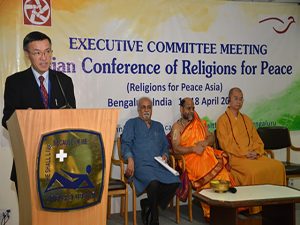 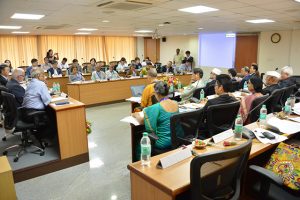 The meeting commenced with a Welcome Dinner on 16th evening. The chief guest was Sri Sugunendra Thirtha Swamiji of Puttige, an eminent Hindu religious leader. He expressed his happiness that such an important interfaith meeting of religious leaders is being held in Bengaluru. He gave his benedictory blessings for the success of the meeting. 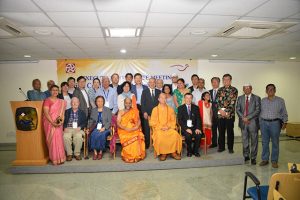 The Committee transacted its business on 17th and 18th April. A sidelight of the meeting was plantation of a few “Interfaith Friendship Trees” in the Campus of St John’s by visiting religious leaders from other countries in commemoration of holding the EC meeting there. 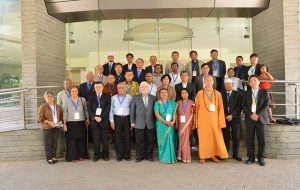 As part of the field visit, the members visited the Seva Sadan in the neighborhood where orphan boys are being imparted training in various skills like carpentry, black smithy, welding, printing, binding, etc. so as to equip them to secure gainful employment. The members also visited the famous Botanical Garden in Bengaluru city. 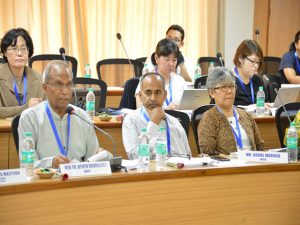 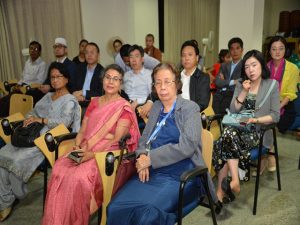 Campaign for “Violence-free India”:  Being a vast, complex and diverse country, India faces many daunting challenges.  Among them are the menace of increasing violence caused by religious extremists – both internal and external. They have become a constant threat to peace and peaceful coexistence and orderly democratic process of development and progress.  It is a matter of serious concern to peace-loving people everywhere.  Small sections of people with vested interests are deliberately manipulating religious and sectarian sentiments as well as socio-economic backwardness to rouse passions, leading to conflict, violence and terrorist acts.

To counter this, some of us who are committed to Gandhian values of peace and nonviolence and democracy, have come together and started a national-level campaign for a “Violence-free India” (“Himsamukt Bharat”) for the past few years. This is an on-going program and we are continuing with this campaign.

Shanti Sena/PEACE CORPS:  We have been organizing “Shanti Sena” or Peace Corps. Shanti Sena means unarmed peace army. Shanti Sena will comprise of student and non-student youth as well as adult citizens trained in Nonviolence and in peace-building and peace-keeping. Qualification to become a Peace Volunteer (Shanti Sainik) is total adherence and commitment to Nonviolence under all circumstances. The task of such Peace Volunteers is to maintain peace and to help restore normalcy whenever and wherever conflicts and violence occur.

Peace Clubs in schools:  Due to societal, familial and various other factors, including exposure to mindless violence in films, on television, video games, etc., children are becoming increasingly aggressive and often indulge in violent activities. This is a matter of great concern to everyone. To inculcate moral values of tolerance and understanding among children and to promote harmonious co-existence and acceptance of diversity and plurality by children, we have persuaded the concerned education authorities to start Peace Clubs (Shanti Kendras) in Schools and other educational institutions in some parts of the country.  This, again, is also an ongoing program. This is part of Education for Peace program.

PROTEST AGAINST HATE SPEECHES AND MINORITY BASHING: With a Hindu Right Wing government in power in India now, we are witnessing a kind of majoritarian dominance. Some members of the ruling party have been instances of making derogatory and hateful statements/speeches against religious minorities. There have also been attacks on political dissidents and places of worship of minorities.  Of course, all these have been roundly rejected and publicly condemned by majority of people, including by us in RfP India/ACRP, on mainstream media as well as in social media

Seminars and Conferences: Our members have also participated in various other programs like seminars, workshops and conferences on issues such as peace education, human rights, environment and sustainable development, communal harmony, gender equality and other social problems held in different parts of the country, besides organizing and participating in different religious festivals and commemorative events.

Our members are associated with several NGOs, educational institutions, civil society movements, Gandhian organizations, and thus a great deal of our work is done through networking. We conduct programs on our own and jointly in association with institutions and groups with similar aims and objectives.

PARTICIPATION IN THE CENTENNIAL CELEBRATION OF KOREA’S FREEDOM STRUGGLE: Mr N. Vasudevan and Dr Deepali Bhanot participated in the 4-day international conference of religious and civil society leaders on the theme “Religions and Peace for Another 100 Years” on 18-21 February 2019 in Seoul, Korea.  This was organized by the Korean Conference of Religions for Peace (KCRP). 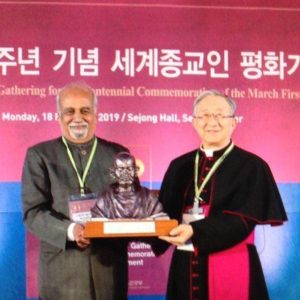 Mr Vasudevan delivered the Keynote address on the topic “Use of Nonviolent Resistance by Gandhi in India’s Struggle for Independence” He brought out brilliantly how Gandhi, a “failed” Lawyer became the Mahatma – the Great Soul – and how his life and work have impacted India in particular and humanity in general and explained at length what provoked him to become a nonviolent resister, why and how he chose Ahimsa/nonviolence as his technique/method; how he trained his nonviolent army, how he mobilized an entire nation of 320 million Indians to follow him; and how Gandhi’s nonviolence is used by people all over the world today to fight injustice and oppression and even to bring about change of governments.

On behalf of Religions for Peace India, Mr Vasudevan presented a statue of Mahatma Gandhi – symbol of Ahimsa and Peace – to KCRP as a token of goodwill and friendship. The gift was received by Archbishop of Gwangju Rev. Kim Hee-Joony, President of KCRP.

INTERNATIONAL SEMINAR IN DHAKA: Mr N. Vasudevan participated in a two-day International Seminar on “World Peace Through Interfaith and Intra-faith Dialogue” in Dhaka, Bangladesh on 27-28 November 2018, which was organized by Religions for Peace Bangladesh. He presented a paper and spoke on the theme at the Seminar and also about “interfaith movement” in the last 50 years since the establishment of “World Conference of Religions for Peace/Religions for Peace” in 1970.

WORLD PEACE FORUM: Dr Bhanot and Mr N. Vasudevan participated in the Seventh World Peace Forum organized by Centre for Dialogue and Cooperation among Civilizations (CDCC)  on 14-16 August 2018 in Jakarta, Indonesia, and both of them presented papers and spoke on, “The Middle Path: Perspective of National Ideologies.’ 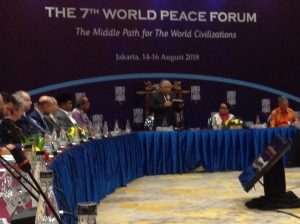 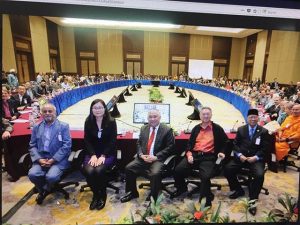 Dr Deepali Bhanot, one of our senior members participated in a Seminar on “National Stocktaking of the Statutes and Condition of Children in India” organized by the National Child Rights Coalition on 20-21 February 2018 in New Delhi.

She also participated in an Interfaith Round Table discussion on the theme of “Regional Interfaith Dialogue on Child Dignity Online” held in New Delhi from 26-27 September 2018. She also participated in another Round Table Discussion on “Pluralism, Identity-based Conflicts and Democracy in India” at Jamia Millia Islamia, New Delhi on 14 November 2018,

Dr Bhanot presented a paper on “Proposing Alternative Models of Poverty Alleviation in the Experience of Religion: A Hindu Perspective” in a Seminar organized by the School of Dialogue with Oriental Religions, in Hong Kong, China’s Special Administration Region, on 23-26  February 2019.

Mr Rishad Shameer, a Law student at Indraprastha University, New Delhi, attended this youth camp as the Indian delegate. There were around seventy people from thirteen different countries, interacting with each other and sharing their unique experiences over a period of four days. He says “it was a life-altering experience that put him on a journey of self-realization as a youth, thinking on the lines of accepting and celebrating differences, not only on a human level but on a spiritual level as well.”

Discussions, visits to religious sites, voluntary community social service and presentation of cultural programs were among the highlights of the Youth Camp.

RfP India: Keeping in mind the changed circumstances and to make it more in tune with the International body, we have now decided to re-register WCRP/India under the name “Religions for Peace India”. We hope to complete the official formalities very soon.