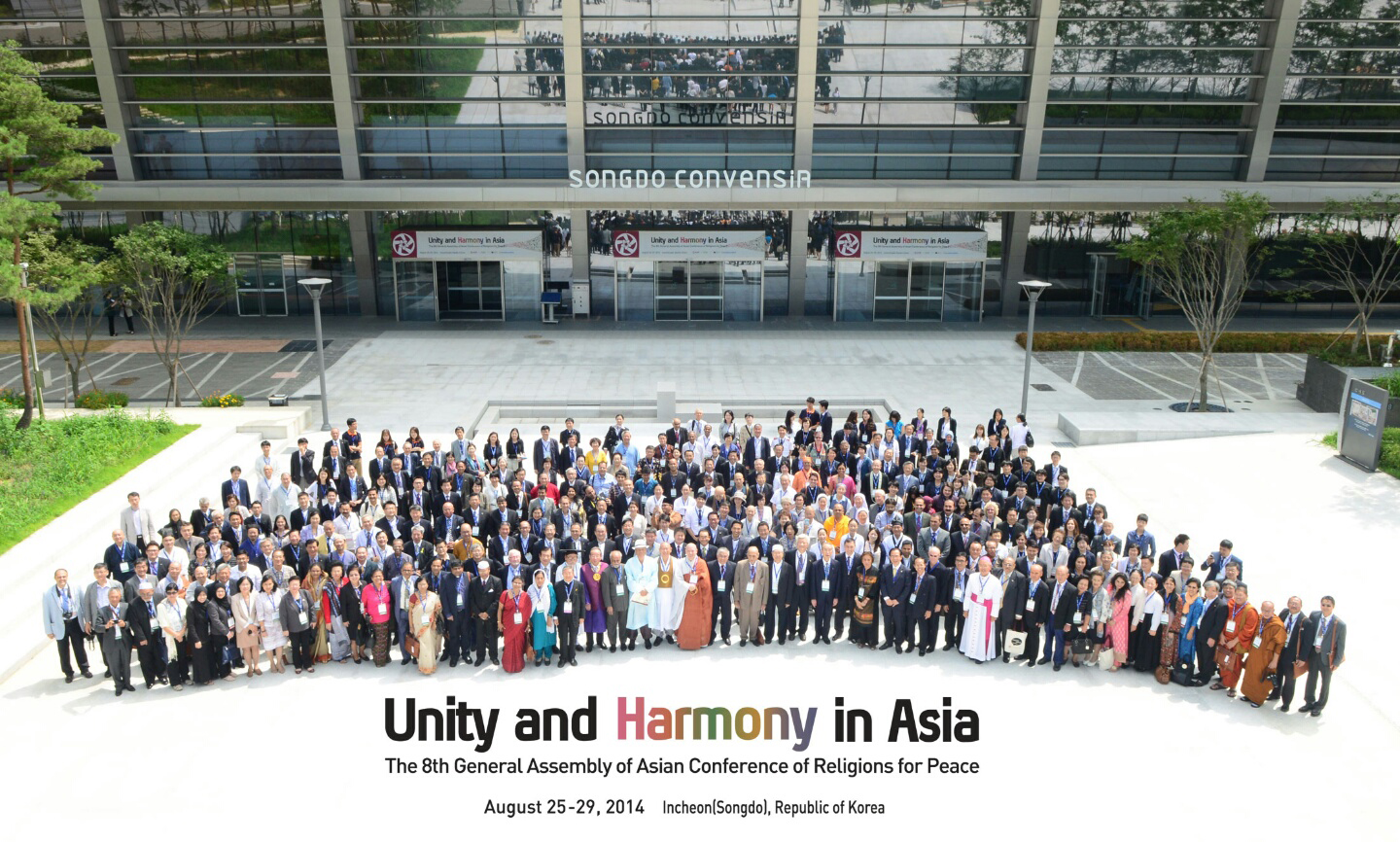 The Governance Assembly is the supreme governing body of ACRP, and it generally meets once every five years. The key functions of Governance Assembly are to review the performance and activities of the past five years to initiate new activities and polices to set new directions and goals for ACRP. It further carries out its important task in endorsing membership additions and in electing the office-bearers of the organization.

In convening an Assembly, the ACRP members proclaim that religions and inter-religious cooperation are essential for a just and lasting peace amongst people and nations, and they can deepen the comprehension of their tasks and responsibilities all the more clearly. The members of ACRP become fully determined to take necessary actions for peace and the well-being of people in the Asia-Pacific region after an Assembly has been held. It is because they are so faithful to the Assembly Declaration, which is adopted during the Assembly where specific recommendations for immediate actions are manifested. 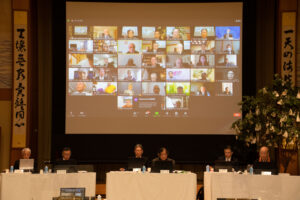 With its 21 member nations comprising more than half of humanity, the Asian Conference of Religions for Peace (ACRP), now generally known as Religions for Peace Asia, held its Ninth Asian Assembly in Tokyo in 19th-22ndOctober 2021 in online mode. It was preceded by the Youth Pre-Assembly and the Women’s Pre-Assembly. Because of the unprecedented and ongoing crisis caused by the COVID-19 pandemic, the General Assembly has been delayed by a year and this year had to be conducted virtually or online because of the uncertainties regarding travel, quarantines and vaccination roll-outs.

The host chapter for this Generaly Assembly was Religions for Peace Japan. Because of the pandemic situation, the Assembly was held via ZOOM. The central theme of the 2020/21 Asian Assembly was Asian Religious Communities in Action: Moving towards an Inclusive, Healthy, Prosperous, Peaceful Asia in developing an interfaith movement working for positive peace and shared well-being across Asia and the Pacific based on the national chapters with the objective to create formal links with key umbrella religious organizations, governments, key international and regional agencies and relevant research organizations in universities.

Because of the pandemic, somechanges were made to the proposed architecture of the General Assembly, including a special session on the COVID-19 pandemic and Asia’s religious communities as the Plenary III of the General Assembly. Additionally, because of the Executive Committeedecision in March 2021, the Assembly was conducted online. As a result, the original set of proposals were simplified. The Assembly was held over 4 days and for three and a half hours per day and in the afternoon (Japan time).

The overall aims of the General Assembly are to approve a new constitution, appoint the office-bearers for the next five years, approve the Assembly declaration and, lastly, to approve a series of recommendations as part of an ACRPaction plan that would guide the organization and the Tokyo secretariat until the next Assembly, probably in 2025.

The Assembly, held for the first time in Japan, was attended by about 120 official delegates from 21 chapters in the Asia-Pacific region and a total of about 1,500 participants (including youth and women’s pre-congress).

ACRP leaders and participants discussed the role of religious leaders in resolving issues such as global warming, conflicts, human rights violations, and the response to the Corona-Virus Disease-2019. 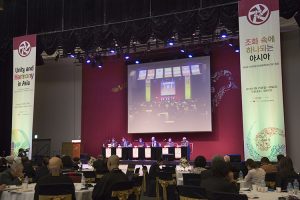 The 8th Assembly was convened at Incheon, the Republic of Korea in August 2014 with the theme of “Unity and Harmony in Asia”. Over 450 participants from 26 countries in Asia and the Pacific participated in the Assembly, where a Special Workshop on the Reconciliation in the Korean Peninsula took place. The Workshop’s key achievement was the issuing of the Peace Declaration of the Korean Peninsula. The number of RfP Asia chapters reached 20 with the addition of the Malaysia and Myanmar chapters. 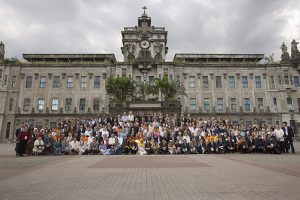 Around 400 participants from 24 countries in Asia and the Pacific attended the 7th Assembly, which was held in Manila, the Philippines in October 2008. The Assembly theme was “Peacemaking in Asia”. Prior to the Assembly, the Religious Youth Summit, attendee by Asian religious youth leaders, was convened at Mindanao and issued an Urgent Appeal for Peace in Mindanao. At this Assembly, the group was rebranded as Religions for Peace Asia. 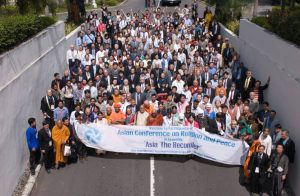 At Yogyakarta, Indonesia in June 2002, the 6th Assembly was hos to approximately 300 participants from 20 countries in the Asia-Pacific region. The theme of the Assembly was “Asia, the Reconciler”. The reality and spirituality of Asia were deeply reflected in the Assembly, which focused on dialogue of civilization rather than the clash of civilizations. The participants agreed that Asian spirituality was a force, which would make people one in spite of their diverse way of expressing the higher nature of humanity. 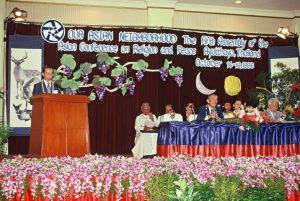 With the theme of “Our Asian Neighborhood”, the 5th Assembly was held at Ayutthaya, Thailand in October 1996. About 270 participants from 25 countries in Asia and the Pacific participated in the Assembly, which commemorated ACRP’s 20th anniversary. During the Assembly, Youth Committee showed its sympathy or the Thao people by collecting US$1,000 in relief funds for victims of a severs flood that had occurred in the region. 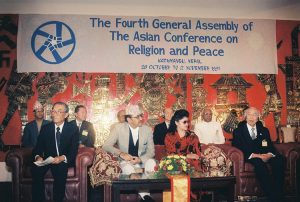 The 4th Assembly was convened at Kathmandu, Nepal in October 1991 with the theme of “Asian Regions Towards the 21st Century”. Over 300 participants from 21 countries across Asia and the Pacific attended the Assembly. One of the issues discussed during the Assembly was the role of religion as society enters the 21st century, in view of the demise of the Cold War. A delegation from the Democratic People’s Republic of Korea attended an ACRP assembly for the first time. 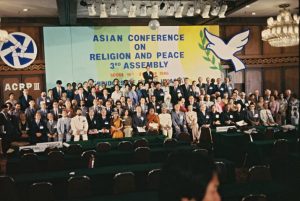 At the 3rd Assembly, over 400 participants from 22 countries in Asia and the Pacific gathered in Seoul, the Republic of Korea in June 1986. The assembly theme was “Promotion of Human Dignity and Humanization”. Since the unification of the Korean Peninsula was the foremost concern of the participants, the Assembly became a platform to help initiate building a bridge of peace and reconciliation between the two Koreas. This assembly saw the establishment of the Seoul Peace Education Center, a fitting commemoration to the 10t anniversary of the founding of ACRP. 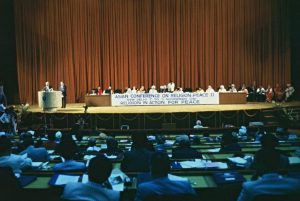 With the theme of Religions in Action for Peace, the 2nd Assembly was convened at New Delhi, India in November 1981 with approximately 200 participants from 16 Asia-Pacific countries in attendance. A delegation from the People’s Republic of China participated for the first time in an ACRP Assembly. The Assenbly adopted the resolution on the establishment of ACRP Human Right Center in New Delhi, India to demonstrate ACRP’s dedication to the protection of human rights in the region. 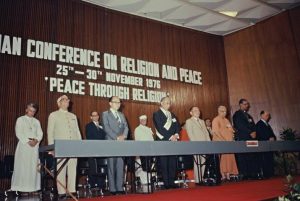 The 1st Assembly was held in Singapore in November 1976, and hosted around 300 participants from 17 countries in the Asia-Pacific region. The theme of the Assembly was “Peace through Religion”. A resolution on Indochinese Refugees Relief was adopted at the Assembly, and immediately thereafter, ACRP engages in relief operations for the refugees in collaboration with RfP International. The Resulting Boat people’s Project caught the attention of International media.