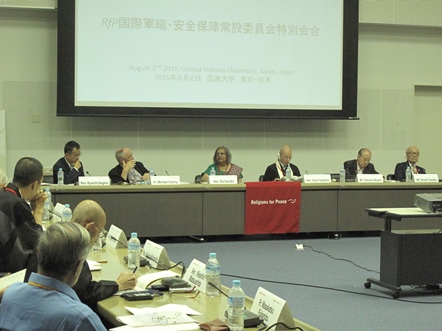 Tokyo, Japan. Religions for Peace through its International Standing Commission on Disarmament and Security and Religions for Peace Japan co-hosted the Special Session entitled “Our Shared Moral and Legal Obligations to Eliminate Nuclear Weapons: On the Occasion of the 20th Anniversary of the Advisory Opinion of the International Court of Justice (ICJ) on the Legality of the Threat or Use of Nuclear Weapons” on August 2 and 3, 2016 at the United Nations’ University. END_OF_DOCUMENT_TOKEN_TO_BE_REPLACED

“Our Shared Moral and Legal Obligation to Eliminate Nuclear Weapons:”

Twenty years ago on 8 July 1996, the International Court of Justice (ICJ) issued a historic Advisory Opinion that stated: “The threat or use of nuclear weapons would generally be contrary to the rules of international law applicable in armed conflict, and in particular the principles and rules of humanitarian law. …There exists an obligation to pursue in good faith and bring to a conclusion negotiations leading to nuclear disarmament in all its aspects under strict and effective international control.” END_OF_DOCUMENT_TOKEN_TO_BE_REPLACED