Saptari Projects by RFP Nepal together with

Nepal has been hit by one natural disaster after another. It was Earthquake in 2015 and in 2017, it was the flood. The Terai region of Nepal was most affected by the floods. There was continuous rise in the water level in various major rivers in Tarai districts caused by nonstop rainfall for manydays. Many people died and lot many were displaced.

As the focus of relief efforts have been centered on responding to the earthquake, survivors of flooding and landslides outside of Kathmandu Valley did not received essential support. RfP Nepal identified Saptari as a place in dire need of support. Working in this area will also provide an opportunity to expand its reach outside the Valley and build multi-religious collaboration and District-level Interreligious Committees outside of the capital area.

Although the funds were targeted towards earthquake victims, this project met the similar objective which was within the spirit of assisting vulnerable victims of natural disaster.

Therefore we sought approval from RFP International and ACRP. Eventually we got the consent that we needed.

Religion for Peace Nepal was introduced to Mr. Kashinath Joshi from Saptari district of Nepal.

Mr. Kashinath’s village has been victim of 2017’s devatating flood in Nepal and the local people of his village were in desperate need of shelter. The exact location of the village is: Tirhut Gaun Palika, Ward Number 5, Maina Kaderi Village, Saptari, Nepal. The village is about 4km away from the East West Highway of Nepal and about 8km away from the place called Bharda.

Mr. Kashinath has his own NGO and has been helping the locals of Saptari for a long time. 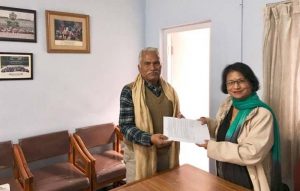 RFP Nepal had asked Mr. Kashinath for the details about the victims. Later we met with him and he confirmed us that we will be building houses in the victims own land therefore the government will not interfere with them later. He identified about 30 families who are in desperate need of shelter. He has also provided us with the photocopies of the citizenships of the victims. He also assured that the families themselves will be contributing as the general labor for construction and we only need to hire the skilled labor. 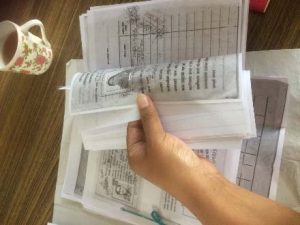 Above: Picture of the copies of the citizenships of the victims. 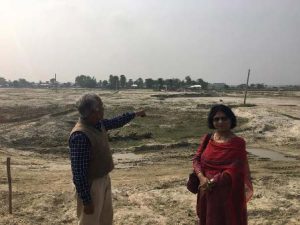 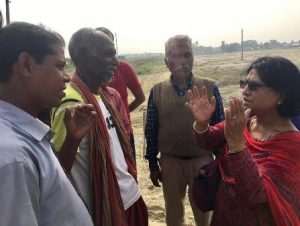 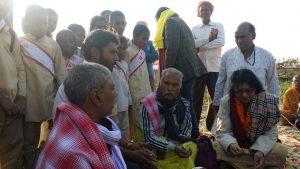 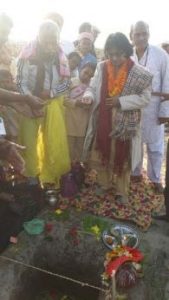 Above: Laying of foundation bricks ceremony in Saptari. Below: Houses under construction 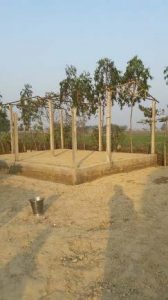 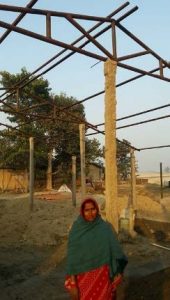 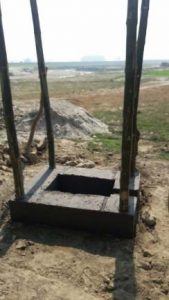 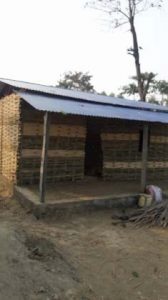 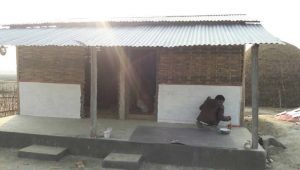 RFP Nepal in the support of RFP International and ACRP have successfully built 18 houses in Saptari for the flood victims and we will have the inauguration ceremony on 18th
February 2018.

Rev. Masamichi Kamiya, Ms. Deepika Singh and Mr. Lok Manya Golcha visited Saptari. Rev.Masamich handed over the keys to the newly built houses to the local. Mr. Lok Manya Golcha made an announcement during the inauguration ceremony that he will help built few more houses in Saptari. He has already donated NRP 500,000 (almost $5000) for the purpose. 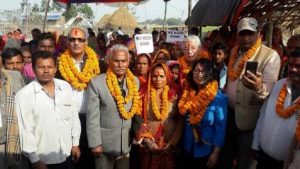 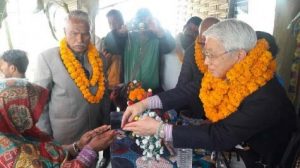 Child marriage practices has been going on in Nepal since ages. Thirty-seven percent of girls in Nepal marry before age 18 and 10 percent are married by age 15, in spite of the fact that the minimum age of marriage under Nepali law is 20 years of age. UNICEF data indicates that Nepal has the third highest rate of child marriage in Asia, after Bangladesh and India.

The Terai area of Nepal has relatively higher rate of child marriage practices. The Terai is a lowland region in southern Nepal and northern India that lies south of the outer foothills of the Himalayas, the Siwalik Hills, and north of the Indo-Gangetic Plain. Farther east, the Outer Terai comprises of the places like Kapilvastu, Saptari and many more districts.

Initially we had built homes for the flood victims in Saptari. While doing so we had formed a local community comprising of various religious backgrounds.

Child marriage is a huge issue and we here in RFP Nepal always wanted to do projects on this.

We have recently develop a community in Saptari and it seemed a good idea to activate thecommunity as well. We talked to Mr. Kashinath and he seemed very positive about the project.

RFP Nepal quickly investigated if there were suitable person who could conduct presentation on the topic ‘Child Marriage Abolition’. We found out that they were some Buddhist Monks who has been conducting such programs. We talked to Vikhu Piyadassi and he agreed to do a program in Saptari.

We were evaluating either to bring the local community here in Kathmandu or to send Vikhu Piyadassi to Saptari. Eventually we thought the best thing would be to send one person there rather than bring a group here. We requested Vikhu Piyadassi and he agreed to travel to Saptari.

As quoted by Vikhu/ Rev. Piyadassi:

‘Peaceful country Nepal is multi lingual and multi cultured as well. Although many districts of Nepal are suffering from religious mal practices, it is our duty to minimize such mal practices. Nepali government and non-governmental organization have been working on reducing and eliminating such practices and this is a positive thing.

RFP Nepal with the intensions of abolition of child marriage had organized a program in Saptari.

This is very relevant thing to do and to do it in the place like Gurukul is even better. It is important for people like Gurus (teachers) and religious leaders to preach against child marriage. In this program I saw the presence of various religious diversity. The religious leaders present there also admitted that the religious books never has stated such mal practices should be allowed. They even vouched that we should unite and should bring such negative trends to an end.

While looking back at the program, I believe it was a good program although the organization could have been better. Otherwise it was all good, even the interaction and participation was nice. The participants also suggested that there should be some kind of continuity to programs like this. I believe the program organized by RFP will be fruitful. Thank you and blessings.’ 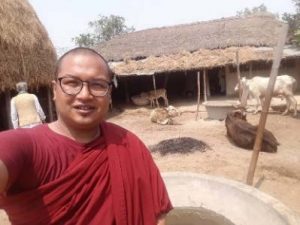 We talked to Mr. Kashinath Joshi after the completion of the program and he was happy to report to us. He said that it was an effective program and we should have a continuity on this.

According to Mr. Kashinath, Vikhu Piyadassi arrived at the venue on Monday 26th March 2018.

He said that Vikhu Piyadassi came equipped with a visual presentation and it was very effective.

He said that he even has the recording of the presentation which he can show it to others later. 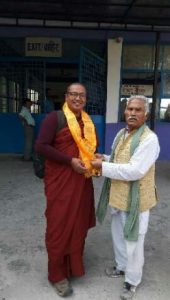 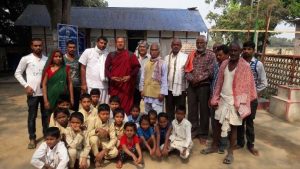 Mr. Kashinath reported that 40 people attended this program on 26th March. All of the attendee were fluent in Nepali so they didn’t have problem understanding Vikhu Piyadassi. All the 15 members of the local community formed for RFP was also present in the program to make it a success.

The next day they had an informal discussion for about an hour on how to take things further on the subject of child marriage. They also realized that they need to do more programs on this to make it more effective.

Since Child marriage Prevention is an important issue, RFP Nepal together with RFP International and ACRP thought of giving further continuity on it. We decided to do a street drama in Saptari.

We contacted a production company who had an ample experience in conducting such street dramas and also visualizing films. We asked them for a script which was later approved by a program officer in UNICEF, Ms. Sanju Bhattarai. She was kind enough to listen to our script and give us her valuable suggestions.

Our story had a positive spin to it, instead of highlighting the victim’s tragic story we decided to show how the life can change positively if the child was given the right opportunity to study and not forced into child marriage. The UNICEF’s program officer thought the positive spin on the story was good, she also said we should also mention how adversely child marriage also affects boy’s life. So we also thought of a male character showing his issues and problems that he had to face by marrying early, the financial burden etc. Besides the female issues will be prominently highlighted as well. She also said that duration of the video should be long enough to engage the viewers. We should give the audience the time to settle down first and then comfortably let them grasp what is being shown.

Finally on December 30th of 2018, the street drama was performed in Bhediya, Saptari. It wasviewed by around 150 locals. We had also conducted a survey on how they liked the drama, what it was about etc, it included the following questionnaire:

2. What was the drama all about?

3. What is the correct age to get married?

4. How bad can happen if you marry early?

5. Who were your favorite characters in the play?

6. If the main character had been married early, what are the consequences she might had to face?

According to the survey conducted, most of the viewers knew what the drama was about and most of them said the correct age to marry is around 25.

We have also visualized the street drama. We have a longer and shorter versions of it. The longer version is about 16 minutes and the shorter version is about 7mins long. In order for the drama to be effective for the viewers to grasp the concept, the length should be longer but for the general viewing people may not have the patience to sit through entire 15 mins long so we thought of having two versions.

We also have a Hindu priest and an Islamic priest to put their views at the end of the video.

They have backed up the fact that child marriage should end and shouldn’t be encouraged.

Nepal has the third highest rate of child marriage in Asia, we are trying to make a difference to change this scenario. We have started with our small steps and we are hopeful to make a big difference.