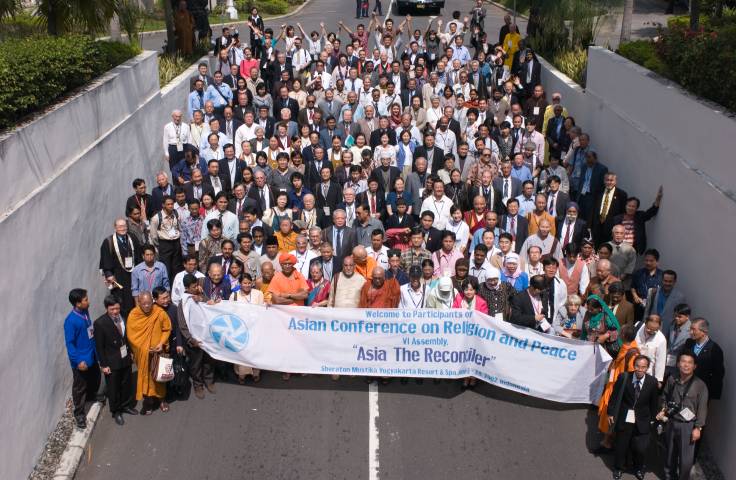 The sixth Assembly of the Asian Conference on Religion and Peace met in the ancient cultural city of Yogyakarta, Indonesia, from 24 to 28 June 2002 under the theme “Asia, The Reconciler” with the participation of about three hundred people from 20 countries belonging to all the principal religions of Asia – Buddhist, Baha’i, Christian, Confucian, Hindu, Jewish, Muslim, Shino, Sikh, Tao, Zoroastrian and others.

We regret to note that the Sixth Assembly of ACRP had to be postponed due to the September 11 terrorist attack. We unanimously say “Absolute No” to terrorism of any kind of any reasons.

There are many divisions and conflicts in Asia which divide the people. As in the previous five Assemblies held in Singapore, New Delhi, Seoul, Kathmandu and Ayutthaya (Thailand), we the people of religion profess to stand on the side of the poor, the oppressed, and the deprived. Religionists cannot be neutral. We are in solidarity with the suffering masses of Asia and we will continue to do what we can towards their empowerment and liberation from injustice and oppression, and the achievement of people-centered development rooted in respect for human dignity.

Asia continues to be torn by conflicts and confrontations, rivalry and repression. Everywhere the level of the militarization, even nuclear, is increasing, political power tends to be authoritarian causing an even enlarging vicious circle of more armament resulting in more deprivation. In the midst of these dilemmas, we came to meet in Yogyakarta, seeking spiritual strength and religious insights to face the ongoing challenge.

Mutual understanding and respect among followers of different religions is growing which is a great step in the right direction. We are now committed to continue our strides on the path we have chosen to widen the field of mutual understanding and respect to achieve peace and harmony in Asia and in the world. It is our challenge and our opportunity in this time of polarization and discord to build dialogue, to establish and uphold genuine respect for plurality as the best guarantee of peace, harmony and security, so to create a new age of hope and reconciliation.

We, the people of religion, are gathered here in the midst of human misery, agony of suffering which echo throughout Asia. The voices of grief of those whose human rights are violated, are no heard. Human dignity is not heeded. Social justice is not taken seriously. Conflicts and violence occur too easily. In Asia, a vicious circle manifests itself in the form of discrimination, disparity, deprivation and violence. These factors, found all interwined all over Asia, constitute an intolerable social conition that cannot be tackled without, at the same time, dealing with the other interrelated problems.

We welcome the peace process initiated in Sri Lanka and the “June 15 Joint Declaration” between the North and South Korea. We acknowledge there is tension between India and Pakistan. We are worried about India-Pakistan tension with nuclear weapons. We strongly recommended a peaceful resolution and appeal that both sides step back from the use of military forces.

Asia is the cradle of all religions of the world. Spirituality which animates the higher nature of humanity, abounds in Asia. It is a force which makes us one in spite of our diverse way of expressing it.

Spirituality may have often led us into the transcendental indifference and escapism from the ground reality of Asia, thus serving unwittingly the cause of the status quo. Spirituality, which we are trying to revive, through our common prayer and witness, is a strength in the midst of weakness, a hope in the midst of despair, and love in the midst of hatred. It has to be channeled to save and serve and the test of its genuineness is in its renewing power of humanization.

In this context, the theme of the Sixth Assembly, namely “Asia, The Reconciler” demonstrates a newly added appropriateness and significance. The five Commissions, set up by the Assembly, discussed in depth the problems of

The Commissions made recommendations for the removal of the difficulties and problems arising from violation of human rights, denial of human dignity, economic problems emanating from a capitalist or socialist system, oppression of women and children and anomalies in the education system which do not cater to the needs of the common people, but are biased in favor of the powerful dominating sections.

Promotion of education, protection of environment, development of “natural capital” and internationalization of civil society networks were also emphasized.

In spite of the growing awareness about human rights and setting up various commissions in many countries of Asia, human rights are violated and worst sufferers are the weaker sections of society, refugee, discriminated against people, women and children.

Education for a Culture of Peace

Parents owe a responsibility towards family and society. Proper education and a congenial atmosphere at home goes a long way to educate children to develop them into responsible citizens and to promote peace, harmony, responsible attitude necessary for peace and progress.

Education for peace is more urgent than ever before. As people of religion, we pledge ourselves to awake and generate to public consciousness as the foundation of peace-making within our own religious traditions, through education in temples, churches, mosques, synagogues, and homes. This will require our commitment to planning, training, and funding for peace education programmes. As religious people of action, we must deliberately link our personal lives and daily choices to our wider work as peace-makers.

In our religious institutions, and in schools, colleges and universities, we will encourage new initiatives for peace education. Our public and community life must include knowledge and discussion of the realities of the arms race, the conflicts that lead to war, the means and strategies for nonviolence resolution of conflict, and the work of the United Nations and its agencies.

Essential to peace education is learning about and coming to understand those different religions, ideologies, and cultures which we share our communities, our nation and our world. The opposite of conflict and violence is knowledge. Therefore efforts must be made to educate about other faiths so that fear may begin to give way to trust. We must strengthen and deepen mutual understanding by sustained dialogue, and by undertaking common work together.

With the explosion of communication technology, mass media have become a beneficial and powerful instrument of expanding knowledge and information. At the same time, they can be a baneful tool of moral degradation. To assure a humane use of mass media, it is the responsibility of religion to imbue them with ethical standards.

In the present-day society, mass media make it possible to bind a large number of people together, to bind group with group, nation with nation, so that they make common destiny and solidarity of humankind easily achievable.

In the light of the recommendations made by the Commissions, Women’s Meet, Youth Groups and taking note of suggestions of the important leaders who participated in the Conference, the following measures are suggested.

The following suggestions are made to tackle the situation:

In all humility, we call upon the power from Above to render us worthy and more useful to our fellow beings.

May our hope and prayer for peace be realized, and the unity and our commitment shown here be deepened.