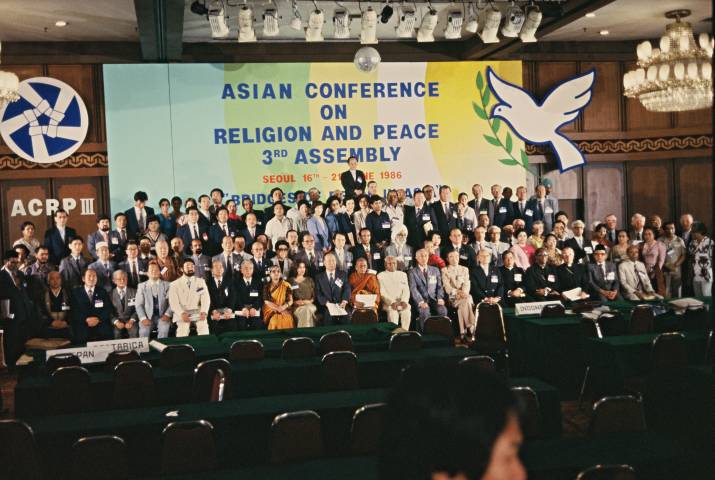 The Third Assembly of the Asian Conference on Religion and Peace (ACRP III) met in Seoul, Korea, from 16 to 21 June 1986 under the theme “Bridges of Peace in Asia.” It had the participation of over four hundred people from 22 countries and almost all religions in Asia.

We appreciate and acknowledge the fact that this Assembly was made possible in a divided country, which is in urgent need to build bridges of peace, which is in urgent need to build bridges of peace. We do sincerely hope that our Assembly itself be an occasion and inspiration to help initiate building bridges of peace and reconciliation over this split nation. There are, however, many divisions and conflicts in Asia which separate us.  As in the previous assemblies, we profess that the people of religion should stand on the side of the poor, the oppressed, and the deprived. Religionists cannot be neutral. Our hearts are at one with our suffering people and our efforts will continue to do what we can towards their alleviation.

So often people are separated from each other because of discrimination, disparity, and the denial of basic human needs. The tensions caused by them should be made creative towards a healthier attitude and steadier partnership. This Assembly will be a humble example of building bridges of peace in Asia.

Asia, at present, is torn by conflicts and confrontations, rivalry and repression. Everywhere the level of militarization is increasing, political power tends to be authoritarian, thus causing an ever enlarging vicious circle of more armament and more deprivation. In the midst of these dilemmas, we came to meet in Seoul, seeking for spiritual strength and religious insights for the ongoing struggle.

Grave issues in Asia—violence, oppression, poverty, discrimination, etc. –are  interrelated. Thus it is imperative to tackle with them in a holistic approach.

Our discussions of ‘Promotion of human dignity and humanization’ have made us alert to the sufferings brought about by foreign domination in the form of forcible separation of families and the ill effects of atomic bombing which should be remedied through religious repentance and all possible assistance.

The disabilities of weaker and discriminated sections of society in Asia still need to change the outlook and habit of society, although social legislation in most countries of Asia is head of practice. The role of religion here is to raise consciousness of the people, for which education for peace trough religion is imperative.

‘Liberation from poverty’ is an urgent task today. Otherwise one cannot live as dignified human being. Basic human needs should be met, which is an essential condition for peace. At the same time, religionists should point out that material affluence and extravagance imply spiritual poverty. That is why religions urge people to assume a simple style of life. Religions teach us that poor people are closer to truth and love, because they are likely to be affected by pride and self-aggrandizement. Religionists should be ready to be poor, willing to help others, so that we may live together. Sacrifice and Service are required of religious people for liberation from poverty.

As we consider the ‘Consummation of nonviolence’ we are encourage by the recent achievement of nonviolent political change in the Philippines. Nonviolence, for religionists, is not only a teaching, but also a practice; not only a philosophy but also a method.

Nonviolence comes to acquire its religious significance in the context of violence prevalent in the contemporary world. Nonviolence is not an escape from violence, but the overcoming of violence. Nonviolence implies resistance to the evil and injustice of the present world which robs people of their human dignity.

Violence in today’s world takes different forms: a system of balance of terror based on nuclear arms race; unjust oppressive governments; structures of economic exploitation and counter-violence against these.   It may also appear as aggressiveness, hatred, lust for power, and pride in our heart.

We have to admit that so often the covert violence inherent in unjust systems is the root cause of overt violence. Our task is to overcome both through nonviolent means. Nonviolence is a way of truth, and a way of suffering and sacrifice. Nonviolence enjoins us to care for the victims of violence, to seek to change systems of violence and injustice, and to train and educate people in the art and science of nonviolence.

It is urgent for us to set up a training course in nonviolence especially for youth, so that they may be able to engage in constructive, conciliatory, and combative activities, leading a change in hearts and structures.

As we reflect upon ‘Renewal and Coexistence between the Followers of Religions,’ it is important for us to have a clear understanding that ‘renewal’ is not necessarily adding something new to an old substance. It means a thorough-going internal change of mind and heart, and this is only possible by supreme grace and compassion. Followers of religions should seek to be ‘renewed’ and learn to ‘live together’ without making any compromise with the fundamental faith of their respective religions.

We are renewed by turning back to the original source of our respective religious faiths and draw upon their spiritual resources which orient us towards love and service of others.

Education for peace may be a joint venture among different religions. International and inter-denominational cooperation to produce a textbook on peace should be seriously pursued, lest there should be any distortion of historical facts or ethnocentric interpretation of peace.

What would be the ‘Contribution of Asian religions To the Global Village?’ The benefit of science and technology, instead of contributing destruction and death, should be made available for a more humane life of the people of Asia and the world. The spiritual heritage of religions has to be utilized for this purpose. We have to discover spirituality which guides science and technology, so that the goal of peace, justice, and well-being is attained. To make this contribution, Asian Religions have to undertake their own self-examination as the often tend to act uncritically as the supporters of status quo and traditionalism. They have to make spiritual and humanitarian values relevant to the dehumanizing forces of modern society.

Youth are molders of the future destiny of humanity. The ‘Role of the Youth in Rural-Development’ is vital for the future of humankind. Youth should reassess the religious dimension of rural community and its close relation with nature. Their sense of justice, and their spirit of dedication are the qualities necessary for building a humane and peaceful society. Special campaigns for “youth awakening” and youth exchange programmes would enable them to contribute meaningfully towards rural reconstruction.

Women are the bearers of life. They know the value and meaning of human life. Women have been, however, long subjected to oppression and exploitation, and they must be assisted in regaining their self-confidence. Proper guidance and education should be given to underprivileged and illiterate women so that they can imbibe human, ethical and moral values.

To control the population explosion and to promote responsible parenthood, methods of family planning which are acceptable from the religious and human points of view should be widely publicized. Abortion should be rejected because it involves the killing of an unborn human being, health hazards and other problems. To eliminate this evil it is essential to secure the cooperation of men and women.

It is important that women should participate in the decision-making at all levels, so that they are actively involved in social development to help building bridges of peace.

No man, no country, no continent, no religion is an ‘Island’, in this global and yet troubled world. We are all bound up for death or for life. The turn of the century is within our reach, and still, the survival of humankind is threatened by nuclear annihilation, which may be caused by a deadly confrontation between East and West. Global disaster may also happen from an unbridgeable rift between North and South. In the face of this foreseeable danger, it is our responsibility as followers of religions, to build bridges of hope, trust, and love towards the 21st century, so that future generations may live in a peaceful world community, a community where people no more fight, but accept, recognize, and share each other, and work together as partners for peace with justice. We hold our vision high that peace is necessary, peace is possible.

In the face of the tremendous task before us, we feel almost overwhelmed by the burden which we have to bear. We confess our ineptitude for this task. We renew our determination, however, to take up this difficult task because we believe that we are guided and assisted by a power from high. We are made strong, in the midst of our weakness. We sincerely hope that we are made humble instruments for peace-building in Asia and the world. May this Assembly be a renewed start of our dedication to peace.

Our immediate concern is the settlement of active violence occurring in different areas of Asia, and we mobilize our efforts with hope that these be resolved soon.

One of our proposals is to set up a Center for education for Peace in Seoul so that we may in a practical manner promote a peace-loving attitude among the people.

We appeal to all authorities concerned and hope that they may promote active moves for the continued unification of families separated by the past rifts in Korea and other parts of Asia.

We are also concerned about refugee problems in different areas of Asia and appeal to all concerned to settle these for the good of humanity generally.

ACRP III Resolution
The third Assembly of Asian Conference on Religion and peace held in Seoul 16 to 21 June, 1986 views with deep concern and expresses solidarity with the oppressed people of South Africa, and demands that this dehumanizing policy and system of Apartheid be abolished immediately.

ACRP III Resolution
The Third Assembly of Asian Conference on Religion and Peace held in Seoul 16 to 21 June, 1986 hereby resolves that a Center for Peace Education be set up in Seoul.