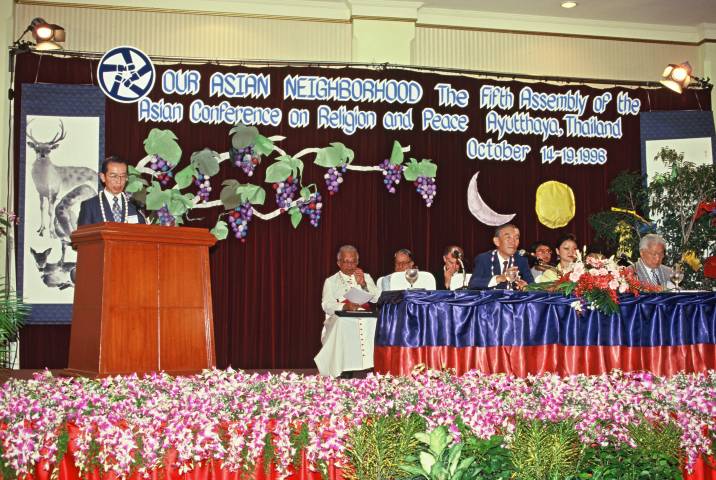 The Fifth Assembly of the Asian Conference on Religion and Peace was held from October 14th to the 19th of 1996, in the ancient riverine capital city of Ayutthaya, Thailand. Under the main theme of the Assembly “Our Asian Neighborhood” about 270 people representing various religions came to participate in it from 25 countries in Asia. Besides, some guests and observers from international and regional organizations working for peace attended.

Asian people, with their rich religious and cultural heritage and with multifarious ways of thinking and living, have come to realize more and more clearly that they constitute a neighborhood. In the world of today, which has been called “The Shrinking earth”, the common destiny of the people living in a Global Village, is now becoming closer to our awareness. For good or ill, we are inseparably linked up with each other. And yet, still in this small world, we are confronted with various evils of violence, oppression, discrimination, inequality, injustice and so on, which we cannot leave as they are if we are to live together as neighbors. To live in a global village is not enough. We have to live and strengthen ‘Our Global Neighborhood’. We, in Asia, have to strengthen our efforts to build ‘Our Asian Neighborhood’, as we know that without ‘Our Asian Neighborhood’, there cannot be any global neighborhood.

The notion of neighborhood carries with it a sense of aspiration to responsibility for qualities of community, of sharing and partnership, of dialogue and cooperation, and of willingness to listen to others and serve our neighbors.

This Fifth Assembly of ACRP will be a historic landmark in the evolution of our inter-religious movement. Held in the ancient Capital of Thailand, Ayutthaya, this Assembly marks the completion of 20 years of ACRP existence. The First Assembly was held in Singapore in 1976 and the Second Assembly in New Delhi in 1981. It was followed by the third Assembly in Seoul in 1986 and then the fourth Assembly was held in Kathmandu in 1991. With this Assembly ACRP truly comes of age. Participants from countries and religious traditions, deliberated for one week, October 14th, till 19th on the theme “Our Asian Neighborhood”.

Asia today is in 1996 so different from Asia 1976. During these two decades Asia has emerged as a more dynamic and vibrant, region of the world.

The Fifth Assembly was preceded by a youth meet and a women’s meet and an expert consultation. The youth not only deliberated on the Assembly theme ‘Our Asian Neighborhood’ but also took humanitarian activities for the flood relief. They raised a hand-some amount for the immediate flood relief in Ayutthaya. ACRP youth infused a new vitality and dynamism into the Fifth Assembly.

The ACRP Women’s meet also considered the Assembly theme and produced an excellent report which was a valuable input for the General Assembly. Further they proposed the establishment of women’s empowerment center at Singapore or Philippines.

The Pre-Assembly experts meeting also provided valuable insights for the conduct of the General Assembly.

The people of Asia are profoundly concerned about the ongoing arms build-up and proliferation of nuclear weapons in the region.

To promote peace, security and good neighbourhood in Asia, we appeal to the national governments in Asia,

Asia is rich in diversity as of, race, culture and religion.

Let us celebrate our differences and live together in a spirit of mutual appreciation and mutual acceptance.

Let our beliefs be translated into action, for the material and spiritual well-being of all social groups, especially the deprived and the marginalized.

True religion means dignity and liberation of the poor.

III. Wholeness of Life – Nature and Humanity in Asia

Life is one whole and all are inter-connected. Human beings should live in harmony with nature.

Nature is sacred. We should worship nature, not exploit nature.

Misuse and abuse of nature should be stopped.

Profit motive and greed should be held in check.

We advocate a holistic approach to nature. Let us build a new consciousness based on interdependence and oneness with nature.

Let governments, NGOs, business groups, industrial groups and religious organizations along with ecological scientists work in co-operation to promote a new global ethic based in the richness of Asian Culture and tradition.

Let ACRP be a role model for the practice of a new global ethic.

Poverty, affects a large number of people in many Asian Countries. Colonialism, exploitation, over population, wars, ethnic conflicts and natural calamities cause immense human suffering, particularly for the poor. The rich should share their wealth with the poor. Excessive consumption by the rich should go.

Sharing is much better than ‘gifting’ or ‘aid’, sharing means a sense of community. In sharing there is no giver or taker. The dignity and respect of all human beings are given equal recognition.

Building a sharing community in Asia is eminently practicable. Our cultural backgrounds nourished by our respective religious teachings provide us a suitable environment to launch such endeavors. Let us launch them.

Developing countries are groaning under debt burdens. International Financial Institutions should write off the loans.

Large numbers of displaced persons are homeless and penniless in many Asian countries. They should be helped.

People’s movements against armaments should be strengthened. Even one percent of money spent on arms will release enormous resources for eradiction of poverty. We urge national governments to honor UN regulations in this regard.

We urge families and persons of ACRP to decrease excessive consumption as a new way of life.

We urge local communities to educate the public to share their wealth.

We must become a transformed sharing Asia.

Women and men should work together as equal partners for the betterment of society.

Starting from the family, both men and women should accept and acknowledge the role of each other. There should be awareness of both rights and responsibilities. Women should have equal opportunity and access to work.

Both men and women have equal opportunities to leadership at the grass-roots and at all levels.

Asian Value System in family life should be further strengthened. The role of men and women should be redefined in accordance with the new ethic of equal partnership. Both attitude change and change in law is necessary.

Education should begin at home and both parents have an equal role in shaping the value and character of children and youths.

Thus we are on the threshold of a new era, an exciting new century, indeed a promising new millennium.

Let us march towards a new Asian civilization,

Let us build a new culture of peace replacing the old culture of war.

global ethic and a global spirituality for the 21st century.

To this noble mission let us re-dedicate ourselves to live together,

to pray together and to work together to build this new global civilization.