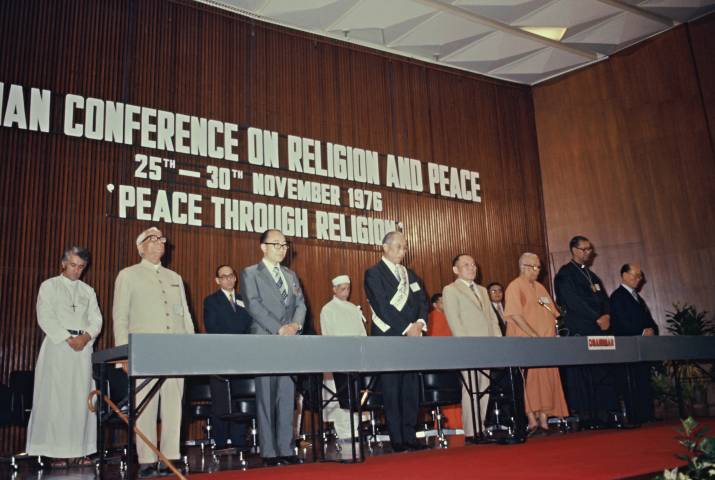 This historic assembly of 300 representatives of over ten different world religions from 17 Asian countries proclaims from the forum of the Asian Conference on Religion and Peace its abiding faith in the belief that religion and inter-religious cooperation are essential for a just and lasting peace amongst peoples and nations. In the search for peace with justice, we have discovered amongst ourselves a unity of purpose amid a diversity of religious beliefs.

We meet at a time when memories of the Second World War are not yet buried and when the wounds of subsequent local wars are not yet healed in many Asian countries. We meet at a time when the whole of Asia is still in a state of crisis, when in many countries there are still economic imbalances and exploitation resulting in grinding poverty, or an authoritarianism which crushes freedom, or conflicts of ideologies and cultures or minority problems, all of which add their quota to the sum total of human suffering.

Although we meet in the peace and comfort of Singapore the cries of the refugees, the protest and agony of the victimized and the oppressed, and the bitter suffering of the poor and the neglected, ring in our ears. How long before men will turn from the ways of destruction! How long before the fires of hate die out! How long before selfishness and greed give way to care and concern! How long before the quiet voice of reason prevails over the clamour of pride and passion!

We the participants in this First Asian Conference on Religion and Peace are conscious that we are called to open up new paths of inter-religious understanding and multi-religious efforts that will lead to peace. We are conscious too of the fact that Asia is a continent where many religious and cultures, whose beacons of truth and wisdom have lighted the path of vast multitudes of mankind through the centuries, have originated and flourished with this heritage we reaffirm our faith in the primacy of religion and the ultimacy of its guidance for solving the political, economic, social and cultural problems which in Asia as in all the world bedevil humanity and block the path of progress. It is our conviction that the great religions we profess, have always had the common goal of establishing peace and justice on earth and therefore we must concern our forces in a spirit of love, brotherhood and tolerance in pursuit of this noble aim.

We rejoice that it is now possible for us to cast away the suspicion and distruct of bygone times, to rise above the rooted prejudices of the past and to gather together under one roof in order to discover the glories and virtues of one another’s faith and the ennobling power of religion to enrich the lives of individuals and nations. Inter-religious dialogue in the Asian Conference on Religion and Peace has convinced us that the great prophets and seers have shown us the way to peace and brotherhood and our Asian religious heritage commands us to harness the springs of human initiative and the bounty of the fruitful earth for the material and spiritual well-being of Asia and the world and for the eradication of social injustices, economic iniquities and other perils to peace. So we call upon all followers of religions to repent of past mistrust and present alienation and to work together for a greater understanding and a deeper spiritual unity within each religion, among different religions, and between all religions and the world of business, labor, government, and the media of mass-communication. In Asia, if anywhere, we believe that the call to peace through religion will meet with a heartfelt response. We therefore declare that new patterns of living involving re-education in life-styles should be worked out by Asian religionists for a better and fuller realization of human potentials. Man does not live by bread alone and so although economic justice must be pursued with vigour yet the satisfaction of spiritual needs is an even more urgent task and one whose achievement will produce a more lasting peace.

We have met to promote a creative and critical awareness of the Asian situation, to revitalize the Asian heritage in pursuit of peace, to motivate religious people of Asia towards concrete efforts for peace and to study and evaluate prospects and programmes for world peace from an Asian religious perspective. We believe that as among the participants in the Conference we have succeeded in the aims, but this is not enough. We pledge ourselves to seek to make people everywhere more aware of the real situation, to rediscover religious values and to stimulate religious people to creative action. We pledge ourselves to continue the promotion of inter-religious and inter-cultural cooperation and harmony in all Asian countries and to collaborate with international, governmental and voluntary organizations that are working for peace.

We wish to declare that our understanding of peace from an Asian point of view is that it is not only negatively the absence of conflict between groups, classes, nations or religious but positively the well-being produced by a satisfaction of human needs, the harmony brought about by the achievement of justice and freedom and the fellowship created by the acknowledgement and protection of human rights and respect for human dignity.

In our deliberations we have been made aware of the tremendous and increasing influence of Science and Technology in the modern world. We wish to declare from the religious point of view that there is no conflict between science and technology and the traditional values of religion but we would urge upon all peoples to see that science and technology be guided by religious and humanitarian standards and values so that they will become servants of peaceful ends rather than masters leading mankind to destruction.

We feel that this control of technology for the good of mankind is one of the vital tasks and challenges facing Asia today. Asian religions with their emphasis on the intimate relationship between man and nature have the resources to meet these challenges and succeed in these tasks.

We advocate dialogue between religions in the search for peace. We believe that this will not only promote understanding but lead to evolving a code of ethics to regulate relationships between religions and avoid misunderstandings that may arouse religious passions. Various forms of inter-religions meditation could serve as points of contact to develop inter-religious fellowship.

We declare that a greater emphasis is needed on the role of youth and of women in bringing about world peace. It needs to be remembered, that women constitute half the population of the world and, in Asia, youth constitutes more than half of the population in most countries. We call on all religions to re-examine the position of women, and where there is discrimination on grounds of sex, to re-assess the position and work for equality of opportunity and status. There appears to be a strong need for the formation of inter-religious women organizations and also youth organization within the framework of the ACRP.

We declare that there is a need for further study by all religions, and among all religions, of the problems of religious education, especially in multi-religious societies.  All religions have a responsibility for education to their followers, especially the young, in the teachings and principles of their religion, but whether this is done solely in religious organizations or through the common educational system of the country raises problems that demand further study. We advocate that inter-religious organizations be formed for this study so that eventually, agreed recommendations can be made to governments and religious educational organizations. We advocate that as part of the follow-up to this Conference the possibility of establishing an Asian Centre for Religious Education should be explored. The work of this centre would be to study the past and present relationship between religion and education in Asian countries, disseminate information on the subject and to suggest ways and means of overcoming difficulties in making effective the contribution of religion to education for peace. As religious education starts in the family we would emphasize the responsibility of the family in preparing the ground and sowing the seed of religious instruction.

We would urge all men and women to exercise responsible parenthood, not only in regulating the size of the family but even more in the way they bring up the children committed to their charge.

Since economic issues play and increasingly important part in the life of the world and since many parts of the Asian scene are scarred by misery and injustice, we advocate the speedy implementation of the new international economic order based on social justice as proposed by the U.N. General Assembly’s special session on Trade and Development in 1974. We also favor the proposal for an integrated commodity programme financed by a common fund that was adopted by the UNCTAD IV Meeting in Nairobi 1976. We draw attention to the desirability of regulating the activities of multi-national corporations in developing countries wherever they militate against the interests of the countries concerned.

We are concerned about the massive rural poverty that prevails in large parts of Asia and we call on all religious groups that have endowments and resources to supplement the efforts of governments by using their resources to speed up the process of social amelioration in such areas wherever they can.

We plead for speedy action by governments and international bodies to rescue and help refugees and other victims of political circumstances from the hopeless plight they are in though no fault of their own.

The desirability of setting up an ad hoc committee, in cooperation with similar U.N. bodies, to collect information on infringement of human rights and to suggest steps to remedy the situation, may be explored.

We think public opinion should be mobilized for the implementation in all countries of the Universal Declaration of Human Rights of the United Nations.

In the interest of world peace we advocate that the Indian Ocean region be made a denuclearized zone of peace in order to avoid the rivalries of Super-powers bringing fresh dangers to the area.

Profoundly concerned at the colossal expenditure on armaments we would strongly recommend total disarmament by international agreement and the prohibition of the armaments trade.

We see eminent merit in the proposal to establish a permanent Asian centre for inter-religious cooperation and suggest that this be considered in connection with proposal for an Inter-Religious Education Centre.

Finally, we are thankful for the achievements of this Conference on Peace through Religion, for all that we have learned from one another, and we hope that it may become a milestone on the road towards, inter-religious cooperation.

Peace be in every heart, in every family  and in all the world!

Adopted on 30th November, 1976, in Singapore
The First Asian Conference on Religion and Peace.