Republic of the Union of Myanmar

Core Group Members
Core Members maintain oversight of the administrative, programming, and financial management and auditing of RfP-M activities. Core members are chosen for their exemplary leadership amongst their constituency and in interfaith activities.

Women of Faith Network (WoFN)
Formed in September 2014, and officially launched in December 2014, the RfP-M WoFN mobilizes existing religious organizations and women groups for multi-religious cooperation with a shared mission to build peace, protect the earth and promote just and harmonious societies.

The WoFN works on development and peacebuilding programs, capacity building and empowerment of women, and the advancement of women involvement in the peace process at home, in the community, and in conflict-affected areasÂ through multi-religious cooperation. The WoFN is committed to gender equality, prevention of domestic abuse, and advancement of women’s issues. It is a member of the Gender Equality Network (GEN); an active inter-agency network of over 117 national and international NGOs, networks, and technical specialists.

RfP-M IYN is currently working on peacebuilding amongst youths with outreach activities to end hate speech and promote, respect, understanding, and tolerance in order to build a peaceful pluralist society.

In June 2012, religious communities in Myanmar came together to form Religions for Peace – Myanmar (RfP-M) as the country’s first full-fledged representative and action-oriented interreligious body for reconciliation, peace, and development. RfP-M brings together all of the four major religions of Myanmar; Buddhism, Christianity, Islam, and Hinduism, and was officially inaugurated in September 2012.

RfP-Myanmar is one of Religions for Peace’s 90 National Affiliates. RfP-M consists of Myanmar’s historic religious traditions and organizations including the Sitagu International Buddhist Academy; the Ratana Metta Organization (Buddhist); the Myanmar Council of Churches (MCC); the Catholic Church; the Sanatan Hindu Organization in Myanmar; and the Islamic Centre of Myanmar. RfP-M works at the national, regional, and local levels and capitalizes on each organization’s ability to mobilize its existing infrastructure of thousands of local congregations. It offers a platform for religious leaders on joint advocacy, coordinated program response, and training, mobilization of local communities around issues of public concern, and for channeling resources through local congregations and other faith groups.

<Mission> Communities with diverse religious beliefs live in peace and harmony in Myanmar.

<Purposes>
1. To urge and motivate all religious adherents in Myanmar to make concerted and conscientious efforts at promoting peace and harmony
2. To promote the sharing of knowledge amongst religious communities, of their respective principles and values to build a peaceful and harmonious society in Myanmar and the world at large
3. To create a forum for deliberating and articulating common interests and concerns.
4. To plan and implement collaborative actions based on shared moral commitments in Myanmar and worldwide
5. To promote respect for unique traditions and differences in belief and action
6. To connect, liaise and cooperate with national and international religious bodies, organizations, communities and societies to promote and enhance lasting peace and universal harmony. 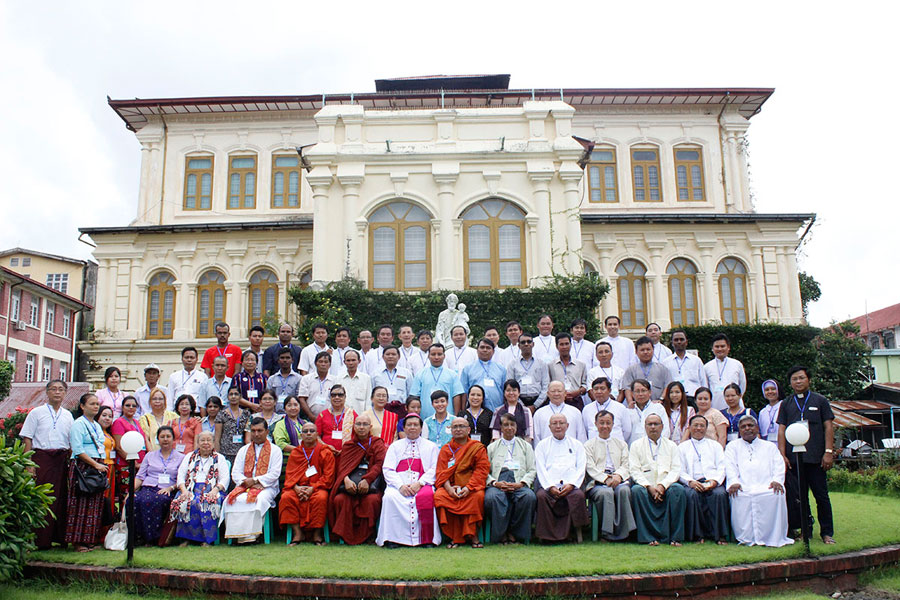